Being Called “Doc” Is One of the Greatest Honors

There exists a different world that many people never see, and even fewer understand. Growing up as a Navy Brat—and this is a term of fondness and affection—installed many things within my character that I carry to this day. I make friends quickly…but we can drift apart almost as quickly. I love to explore…but I love to come home to a “base” of operations. I am not decision averse…though I don’t always make the best ones. I have a sense of loyalty and honor…but that can keep me bogged down in some pretty bad situations.

I went to eight different schools between five and twelve years of age. By the time my father retired to rural Arkansas, I had lived in or visited or passed through 11 homes, 17 states, and six countries. What did I do after graduating high school? My parents signed the emancipation papers and I enlisted in the Navy on my 17th birthday—and the tonsil removal surgery first thing that morning was just a bonus.

In the Navy, I attended the prestigious Naval Hospital Corps School in Great Lakes, Lake County, Illinois. I passed in the top 10% of my class. I gained a skill…a skill that I hope I never have to use.

Being a Navy Brat is a subculture that many people do not understand. More so is the relationship between a Navy Corpsman and a US Marine. My wife’s grandfather was a Lt. Colonel in the US Army, her father was a Staff Sergeant, and many of her relatives served in one branch or another, so she understands the military life. But what she saw when I interacted with a young Marine who had just finished six years mystified her. I remember her words when she looked over at me, her eyebrows crinkled in confusion: “What just happened?”

To begin with, I want to share a couple lines from the Hospital Corpsman Prayer (and no matter your religious preference, the WORDS sum up the DUTIES a Corpsman has to his Marines pretty succinctly):

…Even the corpsman can’t offer much lightness and cheer. / Just help me, oh Lord, to save lives when I can; / Because even out there is merit in man. / …make casualties light / And don’t let any die in the murderous night. / These are my friends I’m trying to save / …You know they are brave. / Let me not fail when they need so much; / But to help me serve with a compassionate touch.

Here’s the story: my wife and I were in the market for a computer nearly 20 years ago. I overheard the salesman that was working with us say he had just gotten out of the Marines. I told my wife to watch. I told him that I had served in the Navy. He nodded and kind of wandered off. Chrissi asked why. I explained that there is a little bit of tension between Marines and Navy—my father called them Seagoing Bellhops and they called him Squid, but there is no other person than a Marine he would rather stand beside or behind when the shit hit the fan.

Then I told her to watch again: I went up to the young man and told him that I had been a Corpsman. A smile split his face from ear-to-ear. He assured us that we did not want the computer we had been looking at but he would get us the best deal possible on the best computer there. After we left satisfied with our purchase, my wife looked to me and said, “What just happened?” I explained to her it was my job in the Navy to make certain that every man in the unit came home as healthy as possible, and even more importantly, that when they were hurt, I took care of them.

This came up again just this past Monday. The company I work for hosted a sales meeting outside Jacksonville, Florida. While walking from the gate to the baggage claim, I started talking to a man that wore a Wounded Warrior Project t-shirt. Turns out he was a retired Marine. He and I shared experiences, laughed together, and shared somber moments of silence. As I was getting on the shuttle, my co-worker asked me, “Why did he keep calling you Doc?”

I smiled. Because I have a job to do.

To all the Marines out there, I will be there when you call or need me. Semper fidelis.

“Lord bless my friends if that’s part of your plan; And go with us tonight, when we go out again.” 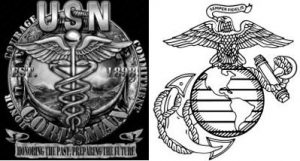 Navy Corpsman and Marines, working together since the beginning.