I Don’t Want to Go to Oz

My wife became angry with me after we had been married a little over a year. As usual with young couples starting out, it revolved around money. I had a friend that was moving to Wichita, Kansas for a job. He needed some help. I volunteered. Well…the truck he rented was only going one way. This meant I had to drive my car up there and drive it back.

Between gas and food, I figured I would need a certain amount of funds. Wouldn’t you know it…we had that much in the checking account (with a little over). This was just after the July 4th weekend in 1999.

On the way there, Sergio and I stopped off in Chetopa, Kanas where my wife’s aunt and uncle lived. We had a nice little lunch and conversation before heading back out on the road. We were heading into some storms. If you know anything about “Tornado Alley,” these summer storms can be steam rollers that wipe out everything in their path.

Three tornadoes hit the Wichita area that late afternoon. I sat through the first two. We watched the weather, and I noticed that there was a gap between the two rows of storms. Armed with this vital information, I took off in my little Honda Accord, hoping to beat one line and not catch up to the other. It was a tiny window, and I had to take it. After all, I had to be at work the next day.

Dorothy was swept up in a Kansas tornado, right? My little car fought the wind and rain. I strained my eyes, trying to maintain eye contact with the road through the torrent of water crashing over the windshield that the wipers could not keep sufficiently swept away.

I made it to Carl Junction, Missouri—just a little over an hour from home. But because I had left Wichita around 5 in the evening and had to either go slow or pull over all together to avoid a mishap, it was about 2:00 in the morning when I pulled behind an EZ-Mart convenient store. After dropping the seat back, I snoozed. I’d deal with work when I got there.

I slept like a baby just after she got that last bottle of the night. Something tapped against the window, waking me up the next morning. Tick. Tick. Tick. Sleep and blurriness filled my eyes and had me blinking so I could see what was going on. The first thing I saw was a clear blue sky.

My eyes focused a little better, and I found myself looking at this fist with letters tattooed on each knuckle, partially covered with gold rings. It was a working hand, rough and stained with years of manual labor. Reminded me of my father’s hands, only his had no ink and no jewelry besides a simple wedding band.

I blinked away the fatigue and squinted at the hand, then the arm, then the shirt unbuttoned to the third hole. More jewelry—a couple gold chains. Then I noticed the badge. The shirt was the uniform of a sheriff’s deputy. My eyes snapped open real quick.

He smiled—more jewelry in the form of a gold cap over his first molar—and motioned for me to step out of the car. Crap. Some moron just spent most of our money. The last thing I needed was a loitering ticket to go with that. Or for this person to be other than what he presented himself as.

“Good morning, officer.” He nodded and asked me what I was doing. So, I told him the story of my adventure through a Kansas thunderstorm and racing tornadoes. He nodded and told me the store staff were worried about me. Seems I had two different license plates. I had only recently acquired the car, and it was used. I needed to help a friend move to Wichita, Kansas. I never changed the front plate.

He watched me remove it right there in the bright sunlight of a southwest Missouri morning. Then he wished me well and drove away. The rest of my trip was uneventful…until I arrived at home. Twenty years later, and I still cannot tell you if she was glad I made it through safe and sound or angry that I spent the night in the car. I think it might have been a little bit of both to be honest. And I may have had to spend a night or two on the couch after that. 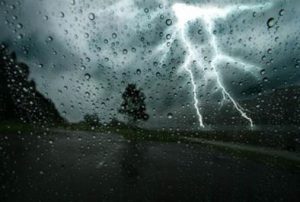 Driving in the storm. 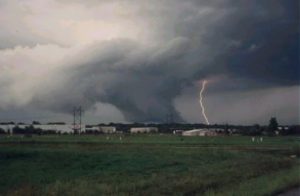