When we are deep in the thrall of this oppressive and heavy summer heat—and with the humidity high enough that the paper doesn’t feed correctly in the printer—I yearn for nothing more than to return to comforts of Iceland. Where we lived on the southwest peninsula, the average January temperatures range from a low of 28 to a high of 35. The average temperatures in July/August start at a low of 46 and reach to a high of 53.

Some summer evenings the temperature still hovers around 80 degrees, even when the sun has already dropped beneath the shoulder of the earth. Those days really get to me. I get cranky and irritable. Nothing makes me happy. I am just downright miserable.

I have been told that Iceland is too cold. Really? Here in Bentonville, Arkansas, the average low during January is 24 degrees! But considering that the low the very next day could be in the fifties, your body never gets used to it. When that range is only seven degrees, it’s not a problem to get acclimated. The wind on the other hand can be brutal.

Outside of that, the weather is one of the reasons I want to go back. Ever since they ripped my thyroid out of my throat because of cancer, the heat is actually something painful. I have always preferred the cold over the heat, but now it is pure torment. I wonder if I can talk the wife into moving to Antarctica… 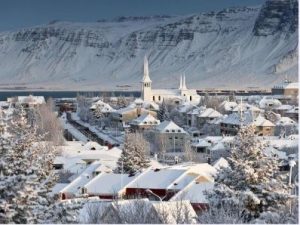 FICTION: The Long Mars by Stephen Baxter and Terry Pratchett. Third book in the Long Earth series. Started kind of slow but picking up enough I will finish it.

NONFICTION: Barbarians to Angels: The Dark Ages Reconsidered by Peter S. Wells. Picked this book up during one of my explorations of Dickson Street Used Book Shop. What we refer to as the Dark Ages may not have been so dark, just illiterate.

TELEVISION: The Boys. Getting ready to start this original series on Amazon Prime.

MOVIES: Watched Hobb & Shaw last night. Great movie. Not a thing in it was believable, but it was one romping adventure. Some great one-liners:  Deckard Shaw: I see what you’re doing. What do you think, I’m stupid? Luke Hobbs: Of course I think you’re stupid.